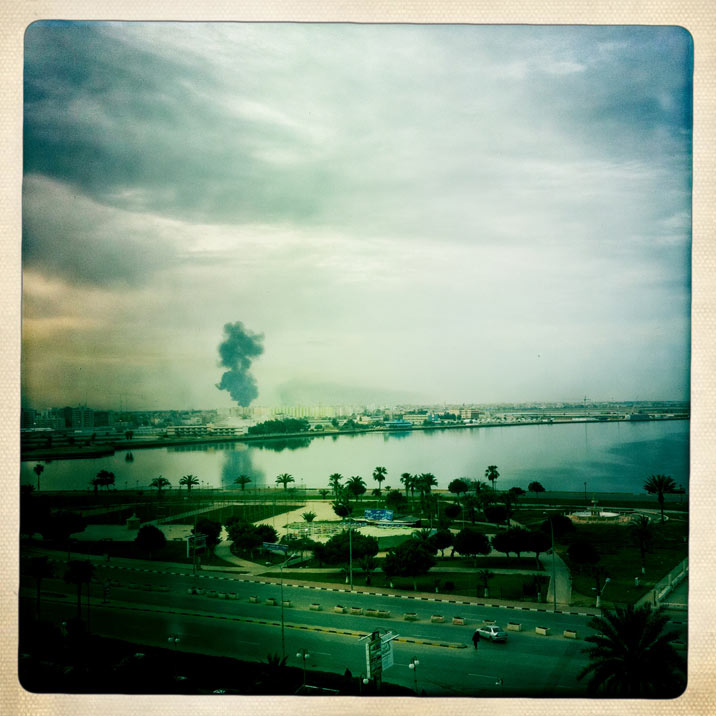 Ben Lowy is an award-winning conflict photographer and photojournalist considered controversial by some because he captures his images with an iPhone.

Of his work, Ben says:

For years, I have worked with bulky digital cameras, always mindful of the technical manoeuvres from setting the shutter speed and aperture to editing and toning on a computer screen. In the last two years I have discovered that my iPhone has allowed me to capture scenes without feeling that I am once again on the job. To “point and shoot” has been a liberating experience. It has allowed me to rediscover the excitement of seeing imperfections and happy accidents rendered through the lens of my handheld device. I am able to create imagery, edit, and transmit all these images, creating a modern and efficient workflow for the most inefficient of pursuits – self expression. 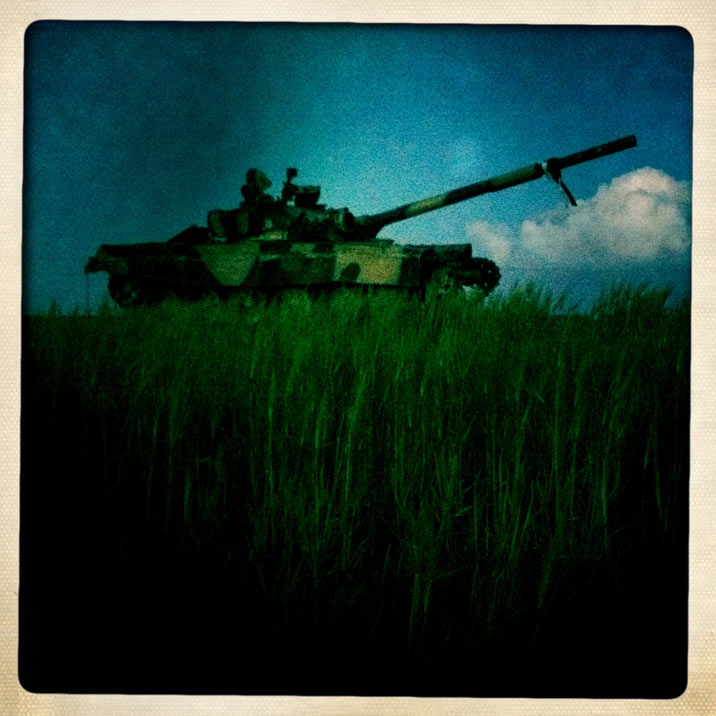 But is Lowy a visionary, or is his use of iPhone apps for reportage unethical? This question is addressed in the following interesting article by James Estrin, reblogged here from the NY Times – enjoy!

Who is Ben Lowy?

The answer depends partly on how you feel about cellphone photography, Hipstamatic and in-camera digital processing.

If you believe that Hipstamatic and Instagram could inspire tens of millions of people to become more interested in “serious” photography, then think of Mr. Lowy as a prophet urging others to abandon outdated and elitist ways.

If, on the other hand, you believe iPhone photography — and the Hipstamatic app, in particular — are the work of the Devil, then you can think of Mr. Lowy as his messenger.

However you see him, Mr. Lowy, 32, has become a prominent photojournalist, represented by Reportage by Getty and featured in The New Yorker, The New York Times Magazine, Time and Newsweek.

Last year, Mr. Lowy won the Duke University Center for Documentary Studies/Honickman First Book Prize in Photography. Memorably, he appeared on the “Daily Show With Jon Stewart” to promote the book that emerged from that project, Iraq | Perspectives.

And Wednesday night, he will receive the International Center of Photography Infinity Award for Photojournalism.

And soon there will be a Ben Lowy Hipstamatic lens.

Mr. Lowy does not shrink from controversy. For the last four years, he has been ardently defending cellphone photography on Twitter, Facebook, his Tumblr and in real life.

As he sees it, shooting with cellphones and Hipstamatic is no different than picking black-and-white film over color or deciding to shoot with a Holga instead of a large-format camera. The decisions are executed in the camera before the image is exported.

He also believes that an explosion of images and the increasing ease of access compel photographers to use different tools to be noticed.

“If you make an image look different enough, peculiar enough, I think that’s that hook,” he said. “I think that if you create a different aesthetic than people are used to seeing, you can attract the public — you can bring them in and then all of a sudden that is when the content is delivered.”

Cellphone photography has been a source of dispute among photojournalists for the past five years.

The New York Times staff photographer Damon Winter’s photos from Iraq — shot for the series, “A Year at War” — ran on Lens. After they won third place in the Pictures of the Year International photojournalism contest, Lens published Mr. Winter’s explanation of his use of phone photography, stating that the argument should concern the merit of the photo, no matter what device is used. The photojournalist Chip Litherland had a different take, that dithering with an app diminishes the honesty of the shot.

When The New York Times Magazine published Mr. Lowy’s Hipstamatic images from Kabul in 2011, Kathy Ryan, the magazine’s director of photography, defended its use on The 6th Floor blog, arguing that the history of photography is one of new technologies challenging old perspectives.

In April 2011, after Mr. Lowy came back from Libya — where he shot using an iPhone, a DSLR and a Holga — he approached Hipstamatic and suggested that they create a lens and filter combination more palatable to critics in photojournalism.

Hipstamatic plans to release the new filter, created with Mr. Lowy’s help, this month. He says it has minimal processing and would fit the ethical constraints of newspaper and magazine news photography. The filter, like others Hipstamatic sells, will be named after a photographer:

James Estrin spoke with Mr. Lowy last month in New York.
Their conversation has been edited and condensed.

Cellphone photography came into its own during the Arab Spring, with citizen journalists making images during clashes in Syria or at the scene of Qaddafi’s death. But there was also a surprising number of professionals that were primarily using iPhones. Some experienced conflict photographers were upset over this.

I think there are a lot of purists out there. It’s just like, when people didn’t accept Eggleston’s color photography and said you can’t do art with color. They couldn’t move on and were unwilling to accept this as a new form of communication, of art. I think that’s the same thing with iPhone photography.

The idea of using a tool that everyone and their brother and their mother has can make some people feel less exclusive. You know, art is only that rare stuff that certain people in certain circles can get and that rarity is what makes it art.

Is there an iPhone aesthetic?

I think that what’s great about the iPhone is that you can choose your aesthetic. You can take a normal image that you photograph on your phone, and with an app, you can make it look like you shot it on a glass plate. You can make it look like a daguerreotype, you can tilt shift, you can do anything. And I think that’s blurring the lines in terms of what’s readily acceptable in terms of journalism, because we have to capture what’s there in front of us and not go back in postproduction — I think one of the big problems in recent years, especially with the Danish school of photojournalism, is this crazy postproduction. There’s just too much of that going on. Photoshop is too easy now.

I used to do a lot of postproduction in my images, in my 35-millimeter images, and I don’t even touch them anymore, because it’s too easy. I know what the lens is, and I know what the film is, and I take a picture, and the picture that I get out, that’s what I use. I don’t do any postproduction on those images. It is a filter, but it is very much like saying I’m going to buy a Holga — every Holga is a different picture. Or if you shoot with your Canon 5D at JPG and leave it on sRGB versus turning it to RGB, it’s going to look different.

So you are saying it’s as conscious a decision as picking a film, a lens or a camera?

In Hipstamatic, there is a “lens” and a “film” — that’s what I choose. I think the problems lies in postproduction, when you’re trying to add what you don’t have to the frame. I don’t know what I’m going to get all the time, none of us do. And that’s what I like about Hipstamatic — yes, it has a filter, yes, it vignettes.

I think that’s a very refined difference and rather minimal to say you don’t want to do that in postproduction, but it’s O.K. to do it in preproduction. It’s the same thing. What would not be acceptable, to do on your computer, is now fine to do in your camera.

If I wanted to take a portrait of you, I can make the choice of what black-and-white film I want to use. I can use Tri-X, I can use Fujipan. They’re going to look different, and both of them are not very accurate representations because you’re not black and white. But I can take that picture, and go into the darkroom and say, “I’m going to put a 3 filter on it,” or “I’m going to dodge and burn,” or maybe I’ll do a sandwich negative to control contrast a little more, print it on multicolor paper, use a 3 here, use a 5 here. And that’s not how I shot it. I shot it on black-and-white, and black-and-white still does not exist in reality.

But this is really the same digital processing, which I cannot do with a DSLR, because it’s done afterward. I see the distinction in the conscious choices, but I don’t see the difference in the effect.

But how is Steve McCurry using aged Kodachrome any different? He used aged Kodachrome, and it had an effect on images that he couldn’t anticipate. They were awesome, but they weren’t reality. Same if you put a polarizing filter on your lens, which is totally allowed. Plenty of people use flash photography — that’s not real. You use a 35-millimeter lens, and you zoom your flash to 85, you’re going to create a a vignette, a snood effect. No one would have any problem with that at all, as long as you don’t do it in post, as long as you don’t burn in all those corners in post. There are plenty of images out there that look like Hipstamatic that are shot with 35 millimeter.

And that’s all I’m trying to do, I think that’s all any of us are trying to do. I think you can’t represent what’s not there. Brian Walski from the L.A. Times got fired during the Iraq war for that. It’s a problem when you decide that you have to create something different to tell a story, something better than what you photographed. And I think there’s a hugely different ethical discussion when someone does that versus “I have a lens or a camera or a filter on my camera” or “I’m using a flash to create a look.”

There are lots of ethical dilemmas in everything we do. None of us are completely objective.

And photography isn’t an objective medium, it’s not a scientific endeavor.

If I can use a tool that allows me to take these images quickly in a new way that attracts an audience to look at content that’s important, and I’m not creating anything that’s not there, I don’t see that as being a problem.

It’s just like a screw-on filter on my lens.

Is the screw-on filter that makes a star every time there’s a light O.K.?

Tell me about the Lowy Lens.

I have been shooting with the iPhone since 2008. I know all the critiques about Hipstamatic, so when I came back from Libya, I approached the company.

I said, “Let’s create a lens that’s more acceptable to all those critics in photojournalism.” But let’s at least create a Hipstamatic lens and film combo where it’s pure and fairly straightforward; something that’s en vogue in photojournalism today where people won’t have a problem. So slightly desaturated, clarity is up, it’s contrasty.

There was a style back in ’04 and ’05 where people were shooting on cloudy white balance, pumping in extra red. I think there’s been a turn back, especially with that lab in Italy. Everything is slightly cool, a little bit desaturated. And most everything from Hipstamatic, on Facebook is all crazy saturated.

And hopefully, that will quiet the ruckus. Until we all all end up shooting HD video and taking frame grabs, because that’s the future anyway.

So… what’s your view? Do you see Lowy as a visionary, or is his use of iPhone apps for reportage unethical? Do iPhone images diminish the honesty of reportage images, or do they make visual journalism more widely accessible? Share your thoughts!
Related post: Do photographs tell the truth?

10 thoughts on “Is it ethical to shoot reportage images with iPhone apps?”