Worldwide Pinhole Day is just around the corner and, as regular readers of my blog will already know, I love pinhole photography!

So, following on from my earlier post Discover the wonders of pinhole photography, here’s a great article from Photojojo to inspire you further… enjoy!

Every year, a strange and wonderful phenomenon takes place. *Every* object around you transforms into a camera.

Let Worldwide Pinhole Photography Day redefine your idea of what a camera can be. It’s happening this year on April 29th!

From your own fist to a Saltine cracker, we’ve rounded up astounding pinhole cameras with tips for your own camera creations.

Turn Your Fist into a Camera

Paulo Gioli takes the art of pinhole cameras to its most primitive level. 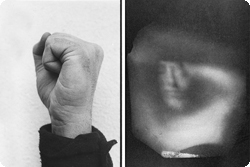 He uses his own fist with a piece of light sensitive paper tucked inside. Opening his fist just enough to let a small beam of light in, he exposed a photo onto the paper.

This process didn’t exist in photographic history until 1989 when Gioli thought outside of the pinhole box.

Gioli shares how he got into making pinhole cameras.

“It’s great to start from nothing. Even if the result isn’t how you planned, you haven’t bought a camera and it’s always a surprise.”

Make Snaps with a Snap 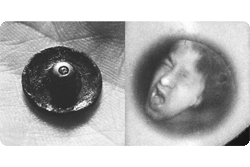 Sometimes making pinhole photos is a snap, literally. Gioli proved that with this extra portable mini pinhole camera made from a clothing snap.

For multiple exposure madness, choose an object that has lots of pinholes, like this saltine cracker!

Alternative Photography put together this explanation on how to make multiple exposure pinholes.

A Camera You Can Wear

Using an object as lightweight as a matchbox let Jaroslaw Klups wear his pinhole camera like a pair of glasses.

He made a contraption that fit around his ears and held the matchbox pinhole camera in front of his face.

That way, he could get a view of his ‘true self’ without feeling self-conscious posing in front of a camera.

The photo to the right is titled 1.5 hour exposure long talks on the telephone, putting the darkroom in order.

If shooting with a match box sounds like fun, check out this tutorial, and try it out.

Ever wonder what a guitar looks like from a guitar case’s point of view? Jo Babcock puts an end to your quandary with this amazing use of a pinhole camera.

Using nothing but recycled materials, Babcock has made hundreds of low-tech pinhole cameras from just about anything you can think of.

Old food containers are especially good for this. Here’s a tutorial on how to turn a chip can into a camera.

Have you ever tried any of these amazing pinhole camera ideas? Would you like to? Share your thoughts!